What better way to test my blogging skills than by starting with a blog about beta tests?

If you have any sort of presence on social media and enjoy videogames, it is very likely you have recently been bombarded by hundreds of tweets and status updates from people who have been invited to beta test a new MMO. I, obnoxiously, am one of those people. Unfortunately, due to the nondisclosure agreement I signed when I agreed to the test, I can’t mention the name of the game (but I am sure you can figure it out anyway). This post isn’t about the game, luckily, or else I wouldn’t have very much I could talk about. Instead, this post is about the importance of beta testing as a facet of videogame culture.

As most of you will hopefully know, beta testing is a type of testing in which a piece of software, such as a videogame, is released to select members of the public outside the development studio to test for bugs. Other things can also be tested for, such as satisfaction of shareholders, functionality of promised product specifications, stress testing servers and viability of marketing strategies. Actually, it has become a marketing strategy in and of itself with many MMOs offering beta tests to anyone who preorders the game. (This has come under heavy criticism for obvious reasons.) But I digress… The main purpose of this post is to talk about the social functionality of a beta test and what it means for fans and researchers.

Opening your inbox and sifting through junk mail to find a beta invite is a little bit like Charlie unwrapping the chocolate bar to find the golden ticket. You have been chosen. You are special. You get to come to the front of the queue and see everything before anyone else… And you get bragging rights. This is precisely why it is such a good marketing strategy. It builds brand loyalty and exclusivity before the product is even on the shelves.

It is also an event- a spectacle to behold. When I get invited to a beta weekend, my entire life is restructured. I go grocery shopping to stock up on ready meals, cancel plans with friends, and- perhaps most extreme- rearrange my sleep pattern. Since most betas launch Friday evenings in the USA, that’s quite late for the UK. To account for this, I will stay up ridiculously late the night before, sleep in and nap during the day, and have a stockpile of caffeine at the ready to play through the night. I change my biological clock to meet the schedule of a game developer half a world away to, essentially, give them free labour. It’s insane, I know.

However, as game researchers, I feel that some of us should go to rather extreme lengths to partake, observe, and experience what a beta opening is. The last time I had the opportunity to be on the front lines of a beta was for Diablo III on 15 May 2012. I, like many others, experienced a terrible server error which meant I couldn’t log in to the game straight away. Looking up the solution to mysterious error code 33 sent me to Blizzard’s forums. There I discovered I wasn’t the only one experiencing this frustration. 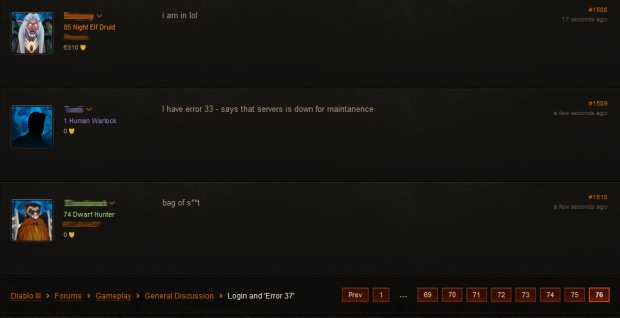 I took screenshots (and later anonymised them) to have a record of how players were reacting to the servers being down. The above image is an example of the typical responses I witnessed. From snarky posts gloating over the fact some people got in straight away to legitimate statements and questions about current server conditions to rage posts directed at the developer, I was rather amused how some players turned the server error into a play activity in and of itself. The bragging and back-and-forth rage between players became an antagonistic sort of play. I’m tempted to code these player responses into modalities to see if it tells us more about community reactions under stress. I mean, in multiple ways the Diablo III beta was a stress test for servers and people.

But perhaps I will have to do that later. For now, I need to go grocery shopping and stock up on ready meals. It is almost time to join the hordes of other testers on the field of battle to charge through the game’s gates for glory and bragging rights.

See you in a week,